So you built an app, now what? Guerilla marketing protips for civic tech apps

Three participants had their own project that needed some exposure, each of which is described below in the form of a case study that may provide some inspiration. We have generalized some guerilla marketing methods at the end that you should be able to apply to your own project.

Website: http://chicagonursinghomesearch.com
Project representative: Joel D. Inwood
App premise: Make sure your loved ones go to a nursing home where they will be taken care of.

Joel, only half-jokingly, quipped that a no-fail method of marketing your app is going to a concert with a crate of water bottles and slapping a label on each of them with a link to your website. Not wanting to pay absurd concert prices for water, attendees will gladly take one and check out the link they were staring at all night. Of course, to put the Nursing Home Search in the right hands, we need a more targeted outreach plan.

The difficulty with Nursing Homes is that the app’s target audience is not just the elderly. Instead, their kids and loved ones are the people who would actually use the service. One place to find these family members in a time of need is in hospital waiting rooms. Reaching out there would be uncouth, but that’s the right direction to think in: find your users and find a situation when their need for your app would be present.

You can’t go wrong with advertising in coffee shops and bus stops, but the group wondered if nursing homes themselves might help advertise the service. Certainly a location with a five-star rating would want to show off that! The team could distribute desk cards to the five-star nursing homes so they could promote their rating as well as the app.

The endgame for Joel and Co. is to have an app recognized as so high quality that morning talk shows would recommend it to families around Chicago. Perhaps the app could reach a level of clout where if a family visited a nursing home and didn’t see a Nursing Home Search placard, they might pressure the management to get one and share their rating.

For the Nursing Home Search team, maintaining the app is a relatively easy task. The service pulls data straight from Medicare’s ratings on the Socrata Open Data portal. There are plenty of academics that work on the subject of care for the elderly. Connecting more with them as well as the AARP, which has a sizeable mailing list for interested parties, and unions, would provide more avenues to promote the app as well as get more subject matter experts involved to make improving the service more sustainable in the long run.

For now, Joel is taking a half day off from his work at the Cook County government to talk to some people at the University of Chicago who are passionate about this topic. Who knows, maybe you’ll run into him at a concert this spring!

Website: https://project-pavement.herokuapp.com
Project representative: Nate Hutcheson
App premise: Find a route to bike from point A to point B based on preferences like time and area type.

The Personalized Bike Routing (PBR) project has several cycling-related projects under its umbrella. Work on Project Pavement, which recruited Chicago bikers to track the quality of roads they biked on by saving data from their cell phone accelerometers, has reached a stage where PBR no longer has to ask mass numbers of bikers to devote their accelerometers. Now, the task at hand is finding people to check the accuracy of the app’s routing.

One sneaky way to target users is to stalk the forums of one of the services that led to PBR’s pain point: Google Maps. The disgruntled cyclists who submit issues with Google Maps’ bike routing could be early adopters for the app.

Reading Google forums, though, is a task that requires a lot of attention and may not even connect PBR to ideal users. The discussion did find one group of citizens who would be more than capable of validating of bike routes: couriers! From the routes they run every week, couriers could be an able group of testers.

The courier dispatch is an easy, central clearinghouse for reaching these people, but when in doubt, couriers can often be found all together at day’s end sitting in a coffee shop catching up and exchanging stories. Your job as a guerilla marketer is to find those centralized, but informal meetup locations.

The National Multiple Sclerosis (MS) Society is another group that has great traction among cyclists in the Chicagoland area because every year, they sponsor Bike MS: a three-day bike tour in DeKalb to raise money for MS research. Bike MS could be a great advertising opportunity for PBR because it attracts a wide range of bikers: professionals, casuals, and all the family and friends who support their campaigns.

Another event that could yield high exposure is Bike the Drive, which blocks off Lakeshore Drive every May to let hundreds of citizens bike along it. That event is sponsored by the Active Transportation Alliance, with whom it just so happens, the PBR team will be meeting with next week!

Graffiti Graph is targeting not just citizens, but the government. The discussion group pointed out that there’s no need to wait for a formal meeting or presentation, as many groups mistakenly do, to show off the app’s value for helping the city operate more intelligently. Just start by making the data stronger.

Graffiti Graph’s citizen-facing prototype asks members of a neighborhood to submit photos of graffiti and send them to the team’s Facebook page. The easiest way for them to grab the attention of government is to take those citizen submissions, adding the extra analysis and information that the app produces behind the scenes, and submitting an enhanced 311 request to the city.

This way, when it does come time for the team to pitch to the Department of Streets and Sanitation or do a demo for government officials, Graffiti Graph will already have validation, and hopefully some proven value.

Graffiti Graph is removing the friction for citizens to report graffiti through their service by not asking them to download a mobile app. Instead, the team is publicizing their Facebook page and requesting that people simply take photos of graffiti they see and message it to the page.

This strategy hopes to capitalize on social media attention but is also based on feedback the team received during user interviews: that citizens in areas where gang activity is prominent would prefer to use an app that appears to be Facebook or Twitter rather than a branded Graffiti Graph app. That way they are not seen as snitching by anyone who happens to get a peek at their screen. What better way to appear like Facebook or Twitter than to actually use Facebook or Twitter?

It would also help to partner with organizations that “know the terrain” around graffiti and gang activity. Joel suggested that the team reach out to 1st Ward Alderman Joe Moreno, who cares a lot about the subject and has amassed many insights about it. Wiring in with a community group that helps clean up graffiti would also open up many natural connections to distribute the service and learn about why citizens do or don’t jump onboard with the cause.

The Graffiti Graph team is made up of seven students in the Illinois Institute of Technology’s Interprofessional Projects program, where students from different majors come together to tackle real world problems. The community at Chi Hack Night has been an invaluable learning resource in helping them move the project along. Sometimes, the best way to grow your app is simply to join in on a community that cares about the topic.

We hope that the results of this discussion have been helpful and interesting to you. If you want to apply guerilla marketing principles to your own project in a way besides how these case studies are moving forward, we have distilled some adaptable lessons into a nice bulleted list for you.

We love having discussions like this at Chi Hack Night! If you are interested or have a different topic that could be better explored through real civic tech case studies, come to a hack night and we’ll make it happen.

Chi Hack Night meets at Braintree’s office in the Merchandise Mart in downtown Chicago every Tuesday at 6:00 PM. 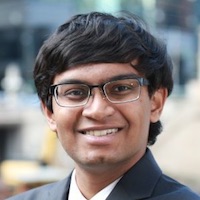