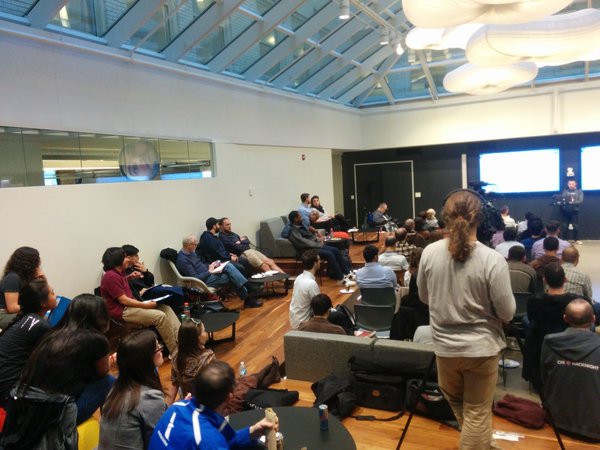 You can see me in the middle, sitting by the wall. That's my usual spot. Helps me see better.

I’ve been attending Chicago Hack Night events for at least 2 years and I’m writing this article to help celebrate their 200th weekly gathering. This image is from May 29, 2016, where the Heartland Alliance presented information. You can see me in the middle, sitting by the wall. That’s my usual spot. Helps me see better.

So why do I attend?

First, I’m not a technologist. I’ve been using technology as a tool to work smarter, think better, share ideas and network with others since the early 1980s. I attend Hack Night meetings because I’m inspired by the ideas shared by speakers. I’m inspired by the talent and the work being done by people who are attending. I’m also hoping to share from my own knowledge and experiences, while finding volunteers to help with my own work.

Here’s a few highlights from my journey through technology and innovation, starting in 1980, when I was one of the first people at the Montgomery Ward Corporate Office in Chicago to have an Apple Lisa on their desk. Ron Mantegna and Ken Novak, peers in the Retail Advertising department, were the catalysts who suggested that using the computer to create ad diagrams and update them would be more time efficient that doing them by hand, since the company changed ad plans so frequently. At first, pepole laughed at me sitting at the computer, and called it a toy. By 1990 the entire multi-million dollar ad planning and development process at Montgomery Ward was computerized based on the work we started in the early 1980s.

I tell this story because it has repeated over and over for the past 30 years. Others with better knowledge of how computers and the Internet work have prodded me to adopt new ideas and have supplied the tech talent to help me implement those ideas. In the early 1980s it was Ken Novak who introduced me to Excel and helped me create a forecasting system that was used in the advertising planning process and generated millions of dollars of benefit. Later it was Ken who introduced new versions of technology, and this idea called “email”.

As I applied these tools for my retail advertising job, I also applied them in my role as the volunteer leader of the tutoring program at Montgomery Ward. While we spent millions on mass communications to draw people to 400 stores around the country, I spent time and talent to create mass communications (starting with duplicating machines) that told our 200-300 volunteers what to expect each week at the tutoring sessions. 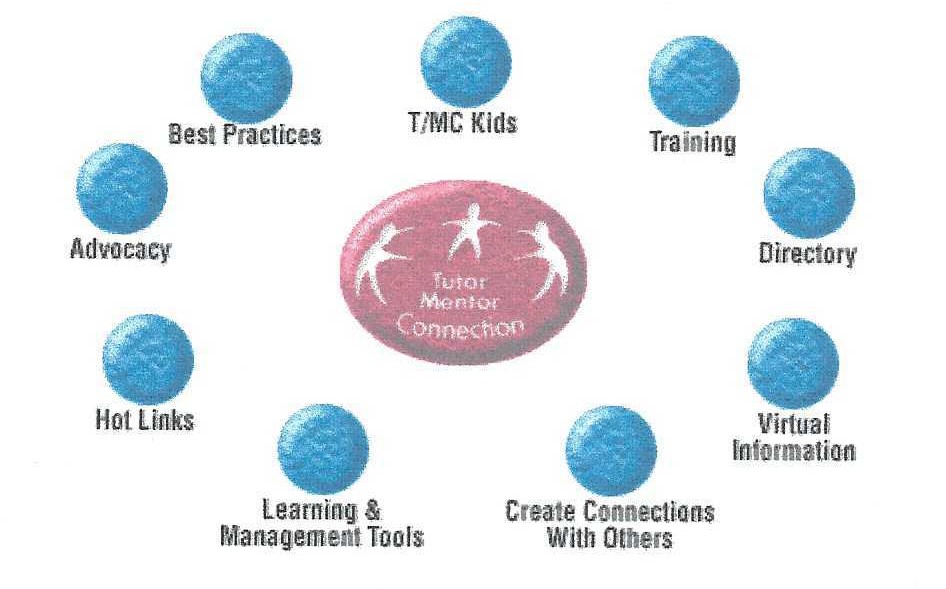 When Matt and I started talking I said “We’ll need people with different talents to help us.” So, he created this graphic as the home page for the www.tutormentorconnection.orgsite that he built for me, using a technology called ‘revista’ which enabled me to edit text on the site. In 2005 this site was rebuilt using dot.net.nuke, by a team from IUPUI in Indianapolis.

I’ve used this hub and spoke design over and over since then to communicate how I was trying to connect others to myself, and each other, in a constantly growing community of people and ideas focused on helping inner-city kids have the extra support they each need to move through school and into jobs. 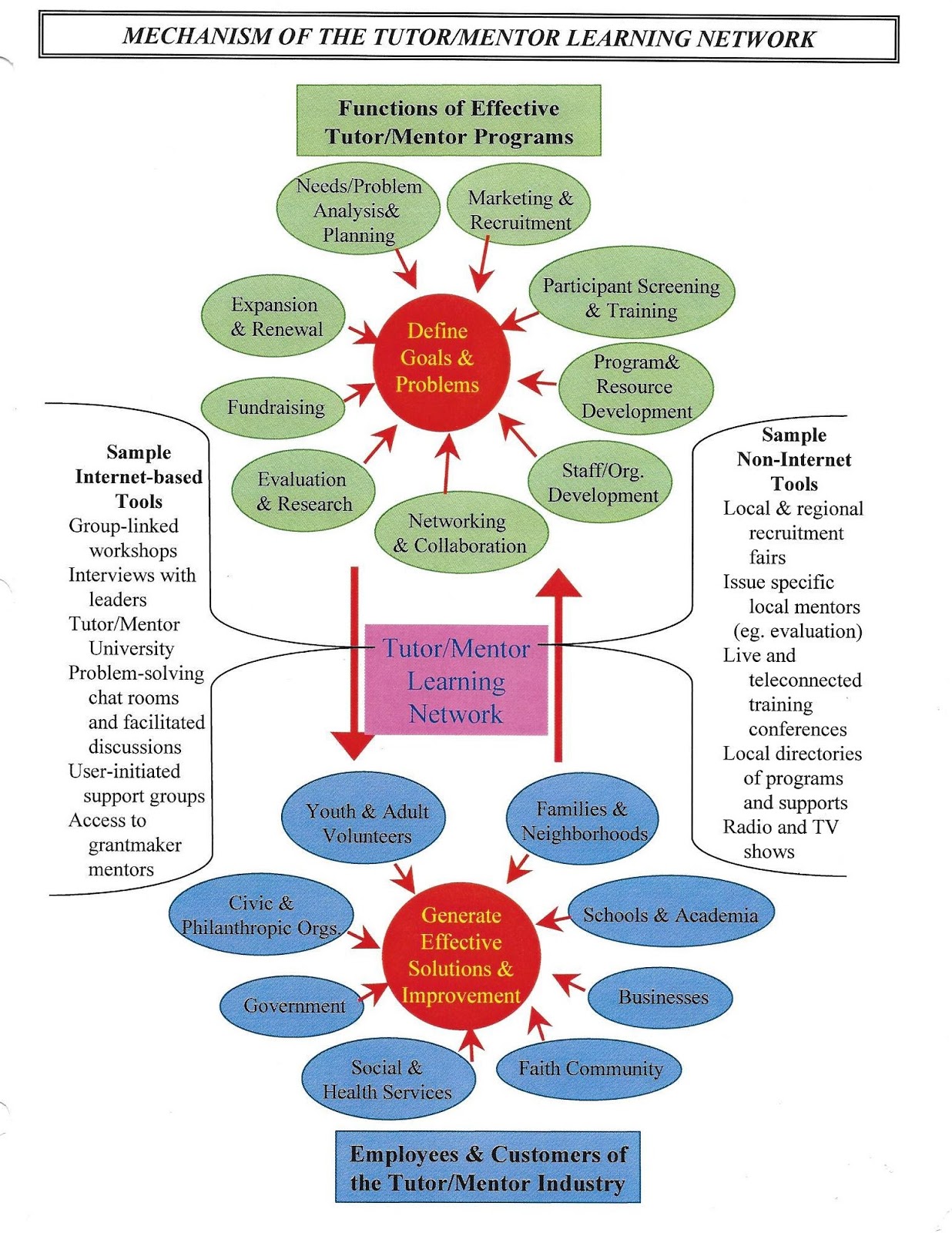 A power point to to describe the work I was doing

In 1999, Steve Roussos, who was then a PhD student at the university of Kansas, used power point to create this visualization to describe the work I was doing. He called it a “Tutor/Mentor Learning Network”, and drafted this paper to describe it to donors. I’ve built hundreds of power point presentations since then, inspired by Steve’s work, including this PDF. Steve was also the creator of the www.tutormentorexchange.net web site in 1998, which now is the home site for the Tutor/Mentor Institute, LLC. In 2000-2001, he also created an on-line documentation system called OHATS (Organizational History and Tracking System), modeled after work being done from the University of Kansas.

While I started collecting information about Chicago tutor/mentor programs in 1993, I did not have an idea of how to display that information until the librarian at the United Way/Crusade of Mercy showed me a geography magazine, and one of my volunteers at IBM introduced me to GIS mapping, and to the Metro Chicago Information Center in 1993. 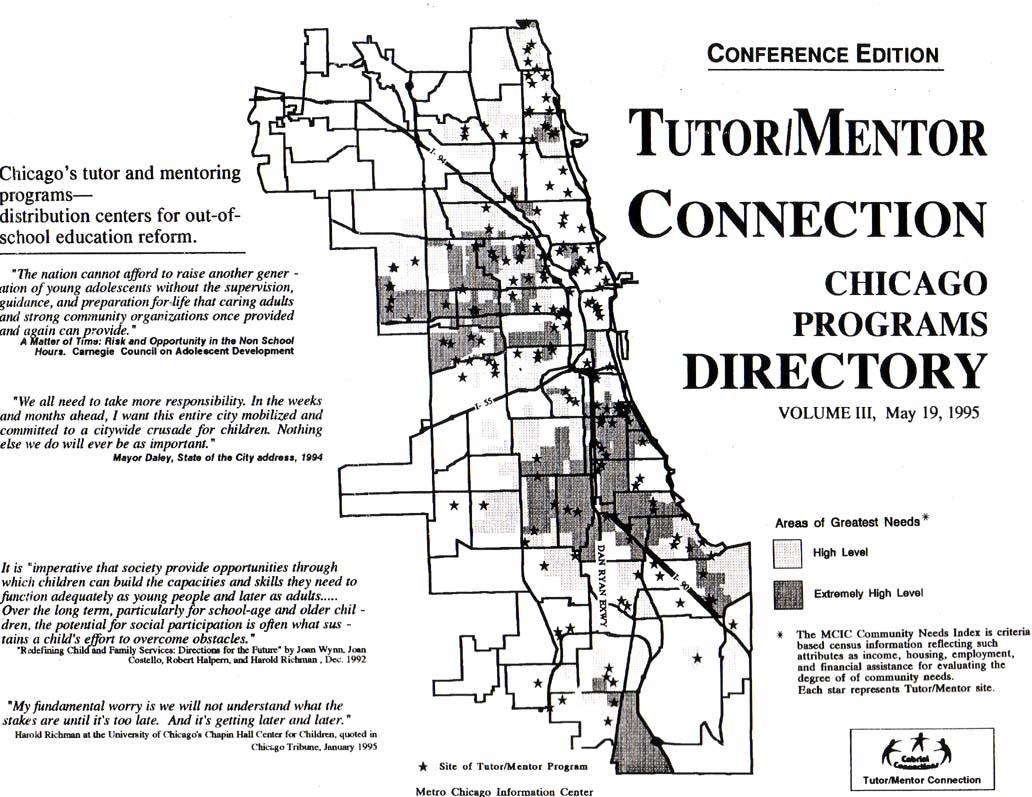 I started mapping the database of programs in 1994 and published the first Chicago Tutor/Mentor Programs Directory in 1995, with contact information and address for more than 120 different youth serving organizations, along with dozens of more organizations who were working in some way to improve the life-outcomes for kids in poverty.

When I started the T/MC web site in 1998 this list of other organizations became the core of a web library that now points to more than 2000 other web sites, including Chicago Hack Night and similar data networking groups. If you look at the link to the web library, you’ll see it’s outlined using a concept map (CMAP tools), which was introduced to me by a former Peace Corps worker in 2005. I’ve created a whole library of concept maps since then. 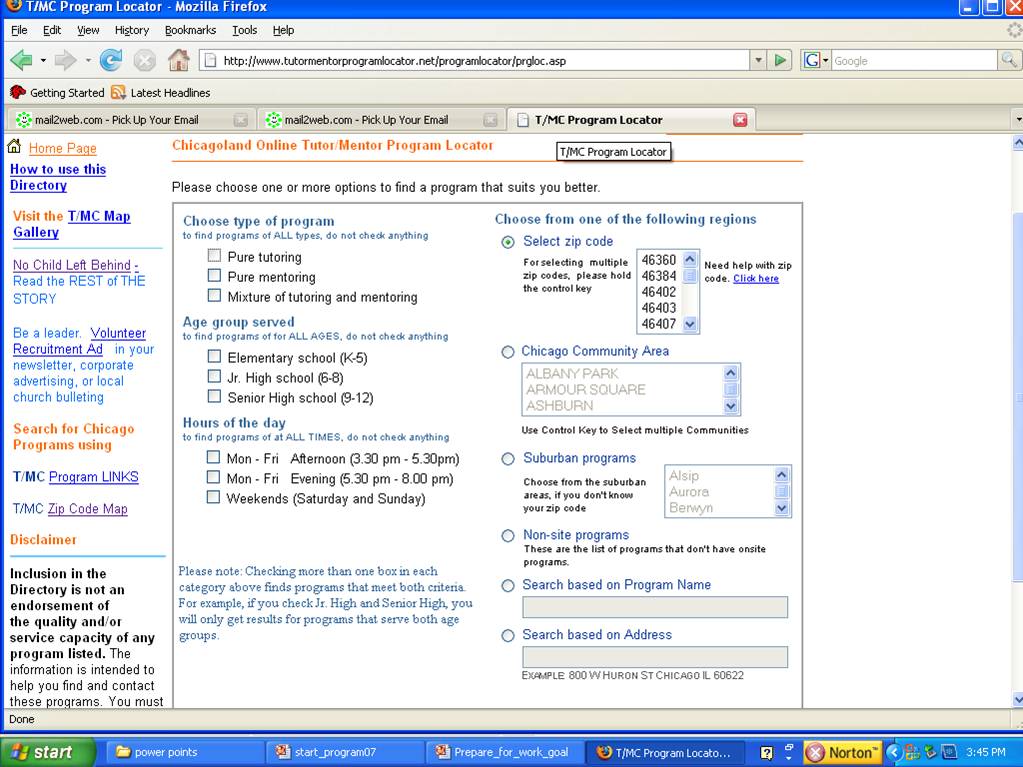 In 2004 an intern from IIT and India recognized my goal of sharing this information on the Internet, and created a searchable program locator that duplicated what was in the printed Directory. This enabled users to search by zip code, type of program and age group served, to produce a map showing that program, and others in the same zip code.

In 2007 another volunteer from India, added an interactive map feature to the program locator, enabling us to zoom into neighborhoods to not only find organizations based on age group, type of program and time of day, but to also see indicators showing where the programs are most needed, and what assets were in that area who could be collaborating to help sustain existing programs or build new programs. 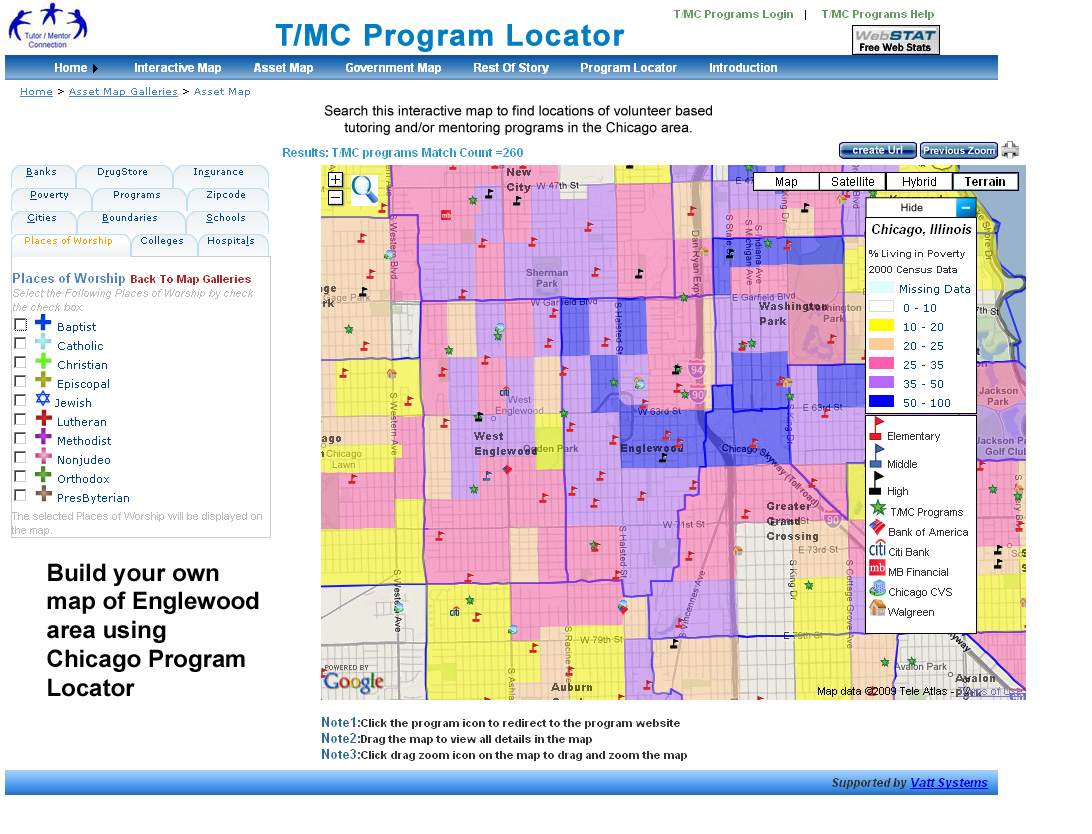 Now (when this is working properly) users can create their own neighborhood map view, to help bring others together to help support existing program or build new ones to fill voids. This PDF describes how to make your own map using this program locator, or other data maps that now are available on the internet. Browse this blog, and the Tutor/Mentor blog, and you’ll find many examples of this type of map-story. 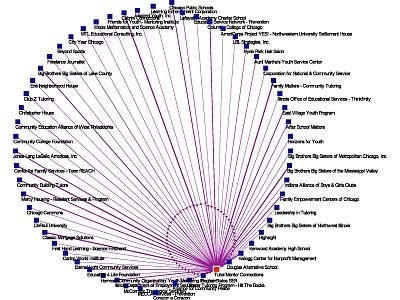 In 2009 Valdis Krebs, one of the world’s foremost experts on Social Network Analysis, spoke at the Tutor/Mentor Conference that I hosted in Chicago, then donated software that interns could use to create maps showing participation in Tutor/Mentor Conferences. This blog shows maps created in 2010. This article shows how I’m still trying to find interns and volunteers to create maps and visualizations that show how networks grow as a result of the work I and other innovators do.

When I attend Chicago Hack Night and similar gatherings of tech and data visualization people, I’m trying to connect with talented people who will help me continue to build tools and visualizations that bring people and ideas together and focus actions on places where time, talent and dollars will be needed for many, many years. I’m also sharing ideas from my own experiences and library, that others can apply in their own work.

The Chicago Hack Night has a tradition of letting everyone introduce themselves at the beginning of each week’s gathering. As I do this, I am posting my intro on Twitter, as I did this week.

Last September I saw a Tweet with a network analysis map like this. I followed it and introduced myself to Marc Smith, who then pointed me to information that I could use to learn about NodeXL, and how I could ask him to create similar maps for me. I created this tutorial so others could learn from my own journey. 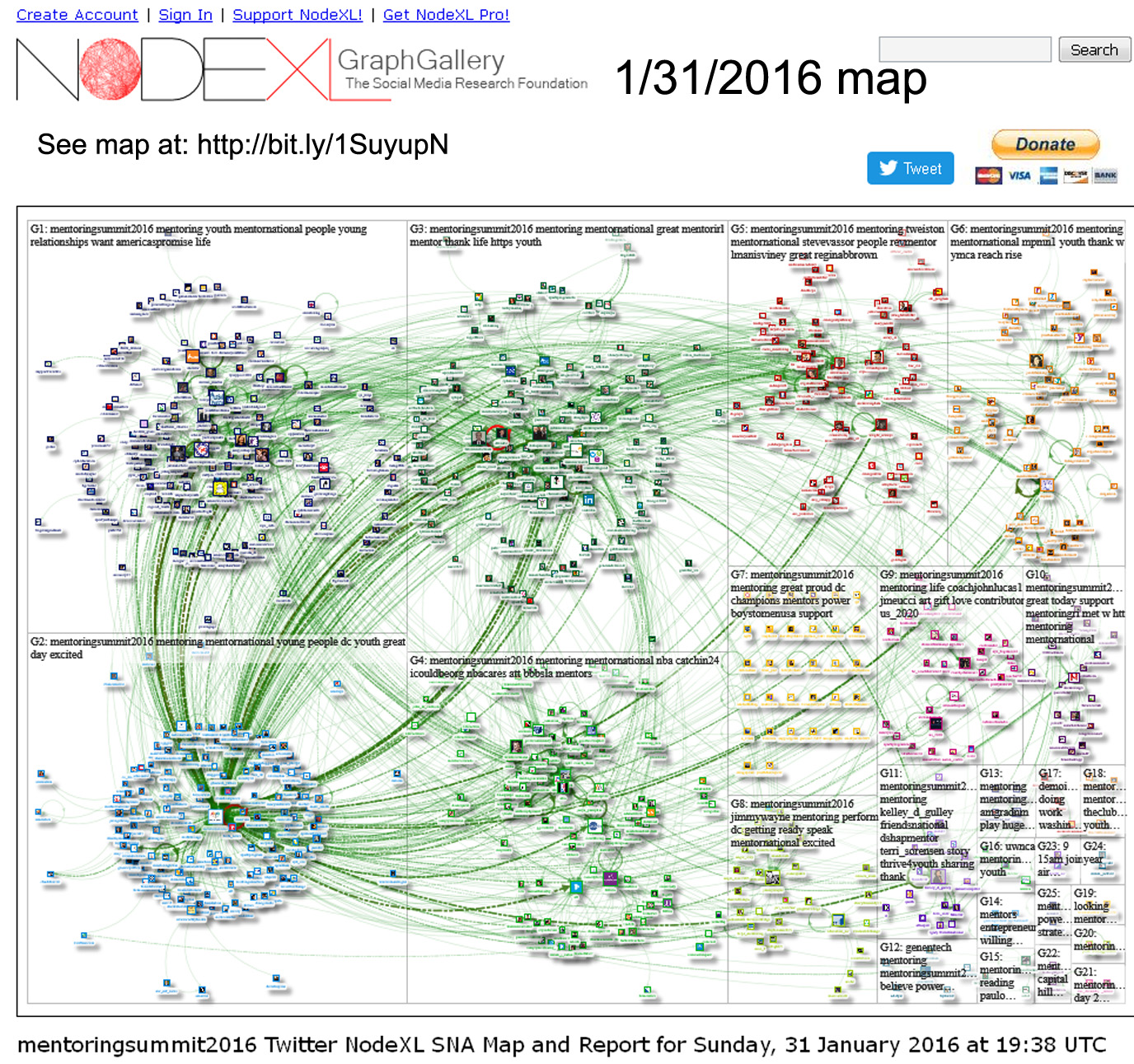 If every participant of a networking event, or conference, hosted by someone in Chicago or another city, were to post a tweet with #chihacknight , etc. maps using NODEXL could show who was participating and how they are connected to each other. Such maps can demonstrate the impact event organizers are having, while also helping participants expand their own networks and find talent and sponsors who will help them with the work they are doing.

I really appreciate Chicago Hack Night and it’s organizers and sponsors for creating a space where I can be inspired by the work of others, where I can share ideas that any of the participants might apply in their own work, and where I might find people who will volunteer time, talent and dollars to help me keep doing what I’ve been trying to do for the past 20 years.

I encourage anyone who has read this far to go to this site and see the many ways Chicago Hack Night is supporting technology innovation in Chicago.

Thus, I’m not a data scientist, or coder, and I depend on the talent of other people to create and maintain the technology platforms that share my ideas and bring people together to help youth in high poverty areas of Chicago. The examples posted on this blog are just a few showing how others have helped me in the past, and can help me again in the future.

They also may serve as inspiration for a project someone in Chicago, or elsewhere in the world, will develop and apply in the future.

While I’m not able to stay each week and contribute on the many projects in process, I’m available to connect between sessions to offer suggestions and/or point people to some of the resources and ideas I share. Just Tweet me @tutormentorteam.

This was originally posted on Mapping for Justice on March 31, 2016. 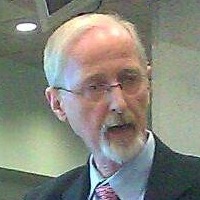