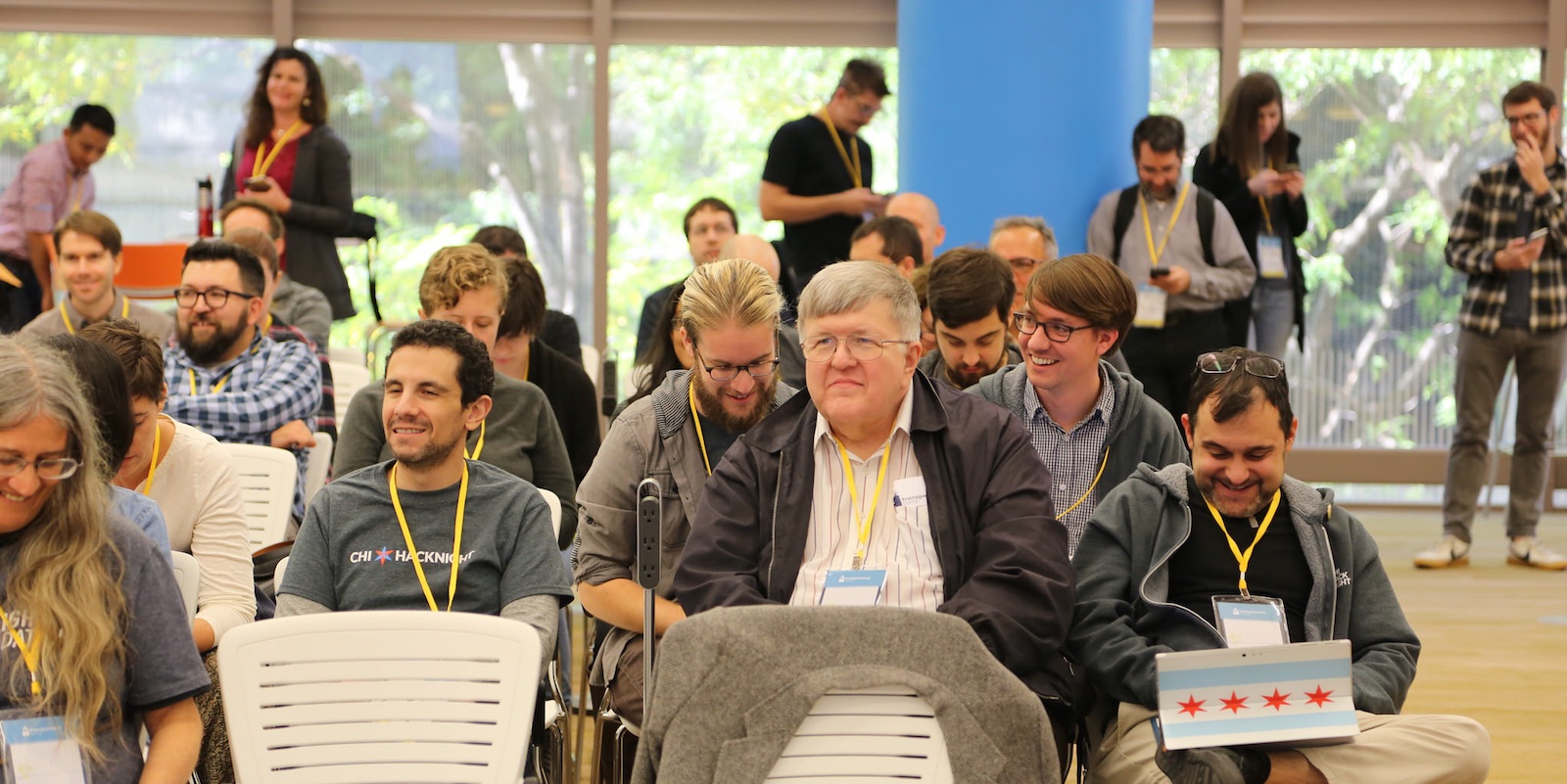 Oct 14-15, 2016 was Transparency Camp in Cleveland, Ohio - and Chi Hack Night was there to represent Chicago!

Transparency Camp, or TCamp as we like to call it, is an unconference that focuses on sharing knowledge about open government, civic tech and how we can make our government work better.

Getting there: The Chi Hack Night Bus (it was actually a van)

As advocates of transparency and open government, it’s only natural that members of Chi Hack Night decided to attend. With Cleveland a 5-6 hour drive away, we decided to make a road trip out of it! We rented a van and hit the road. 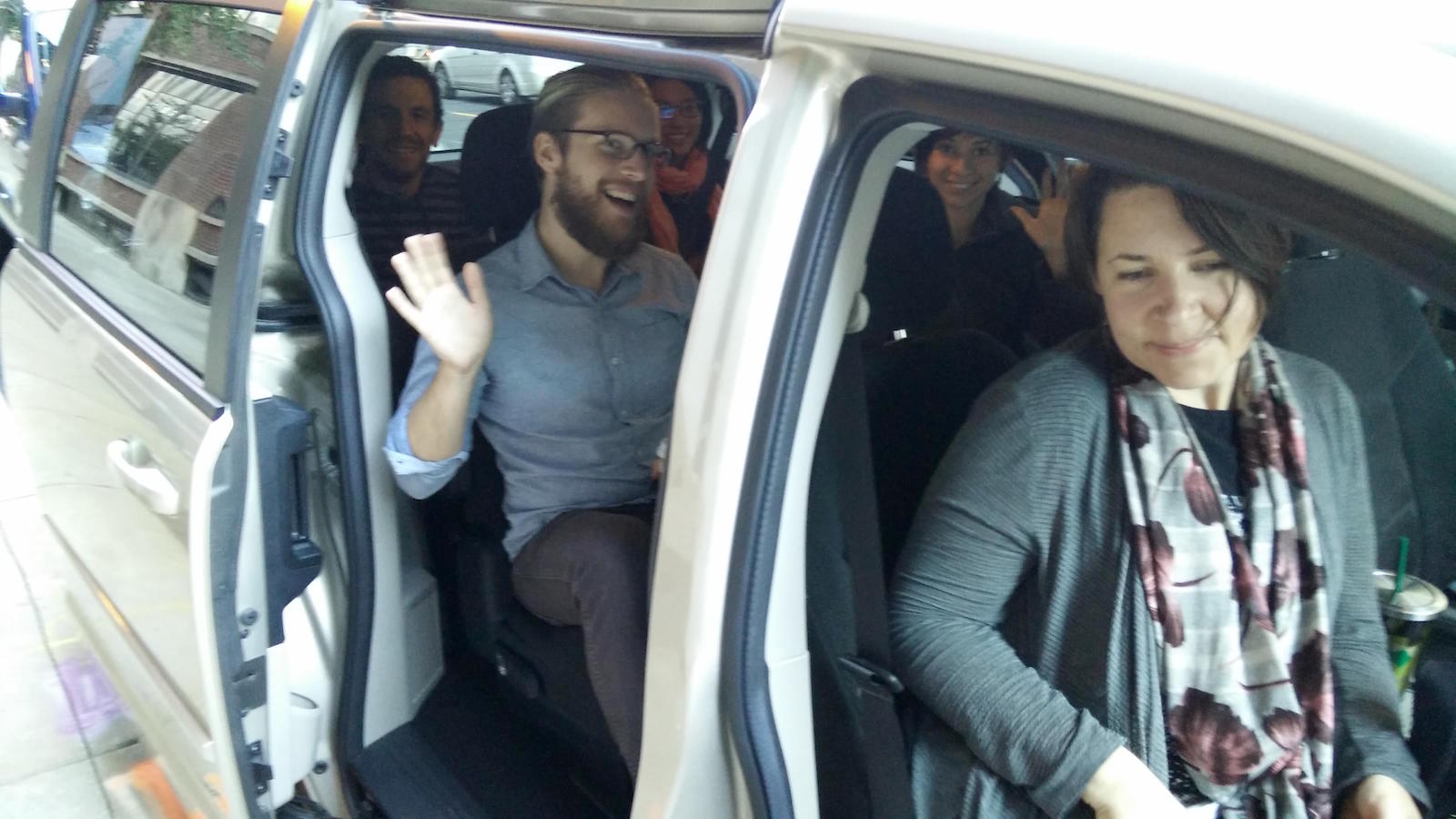 Along the way, we talked about civic tech, politics, the election, the origins of Toledo, and listened to A LOT of podcasts. If you’d like to recreate the magic that was the Chi Hack Night bus, here’s the list of podcasts we listened to:

We also created a hashtag for our trip: #hacknightbus. You can recap our adventures on Twitter!

Transparency Camp is an unconference, meaning there are no set speakers. Participants submit session ideas, and everyone votes on what session they’d like to go to. The sessions with the most votes get assigned rooms, and off they go! Each session is encouraged to take notes and share out what they discussed on the Transparency Camp website.

Each session is run differently, but the general goal is to feature open discussions rather than having a single speaker at the front of the room giving a talk. 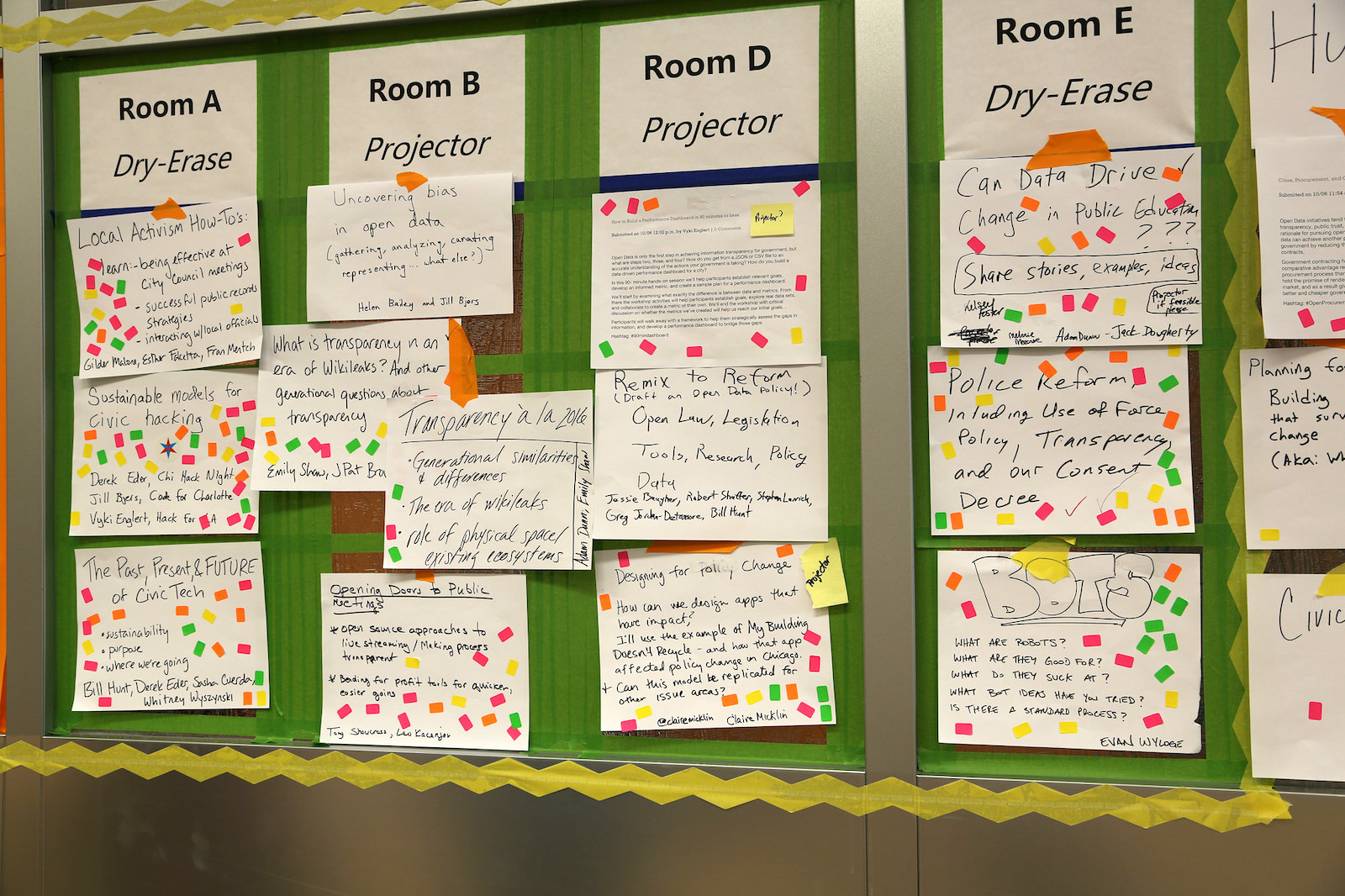 The Chi Hack Night crew proposed and led several sessions, from mapping, to design thinking, and discussions about sustainable models for civic tech. Here’s a recap of each. 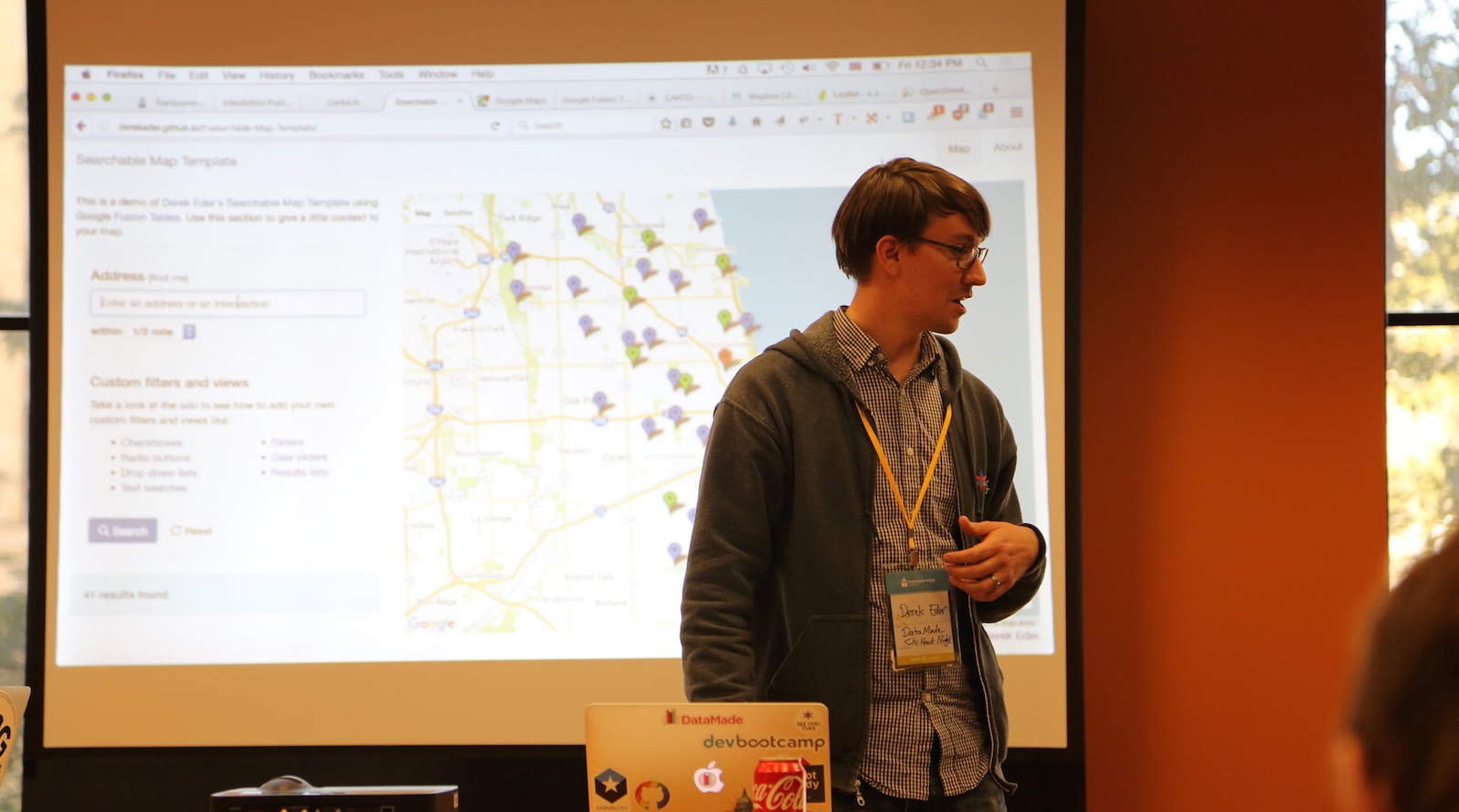 Derek and Jack have built a lot of interactive web maps. The Searchable Map Template that Derek built and released as free and open source has been used by hundreds of people to create simple, searchable maps. But Fusion Tables might not be around forever. It’s time start building a new generation of simple mapping tools.

Jack Dougherty from Trinity College debuted & demoed his new mapping template using Leaflet and Google Spreadsheets called leaflet-maps-with-google-sheets. It allows anyone to setup and configure their own map without having to touch any code. Much like Tarbell, all the data and configuration settings are all contained in a Google Spreadsheet.

Derek demoed CartoLib, a javascript library DataMade has been developing that evolved out of the Searchable Map Template. It uses Carto (formerly CartoDB) as a back-end and contains all the features used to make sites like 2nd City Zoning, ClearStreets and Large Lots.

Read the full notes from this session. 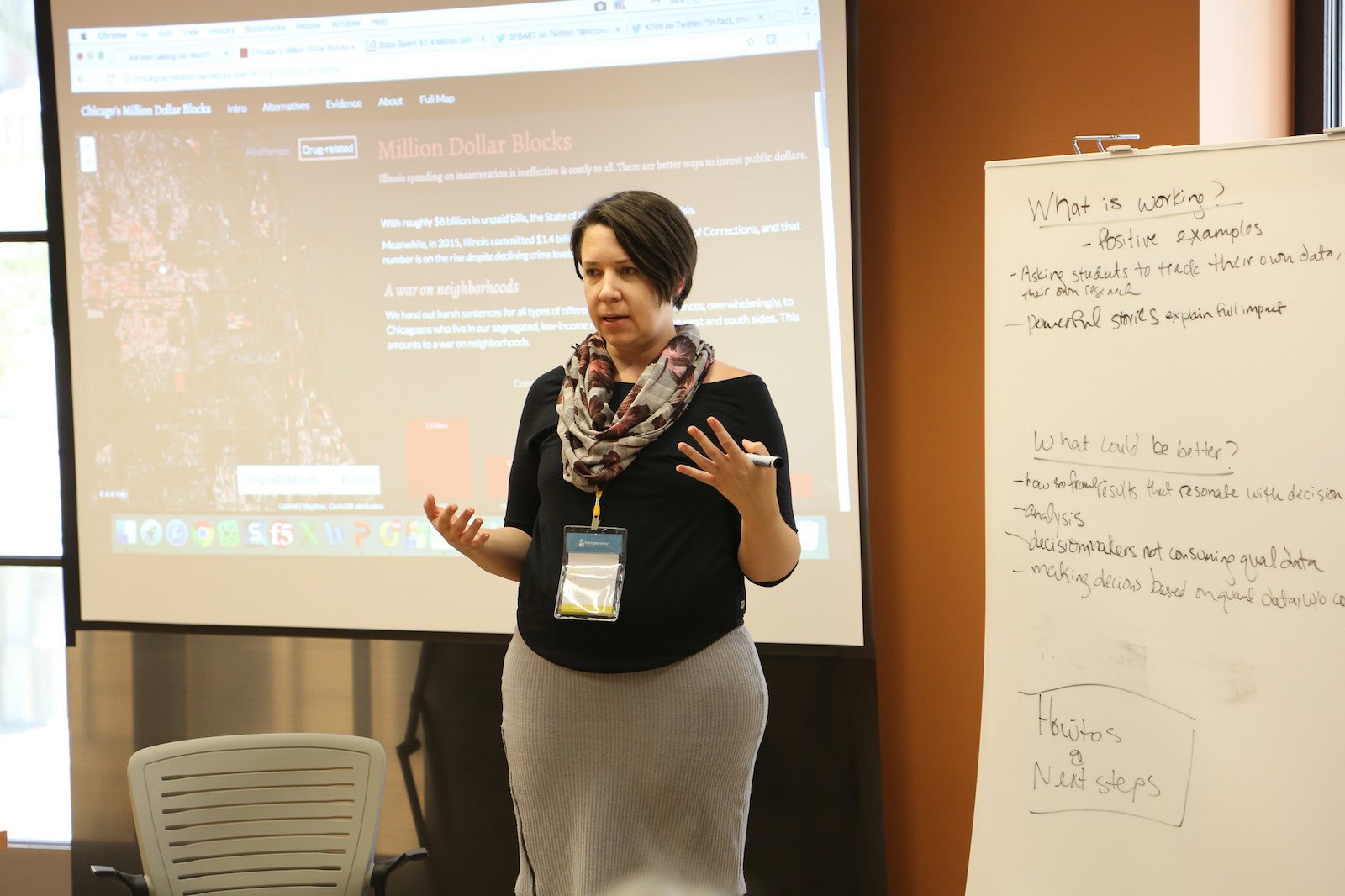 Kristi kicked off a discussion about the value of qualitative data. With data journalists, data scientists, and social scientists in attendance, the group outlined some expert ways of combining qualitative and quantitative data in order to overcome biases and make decisions. Look out for a blog post on her session here soon! 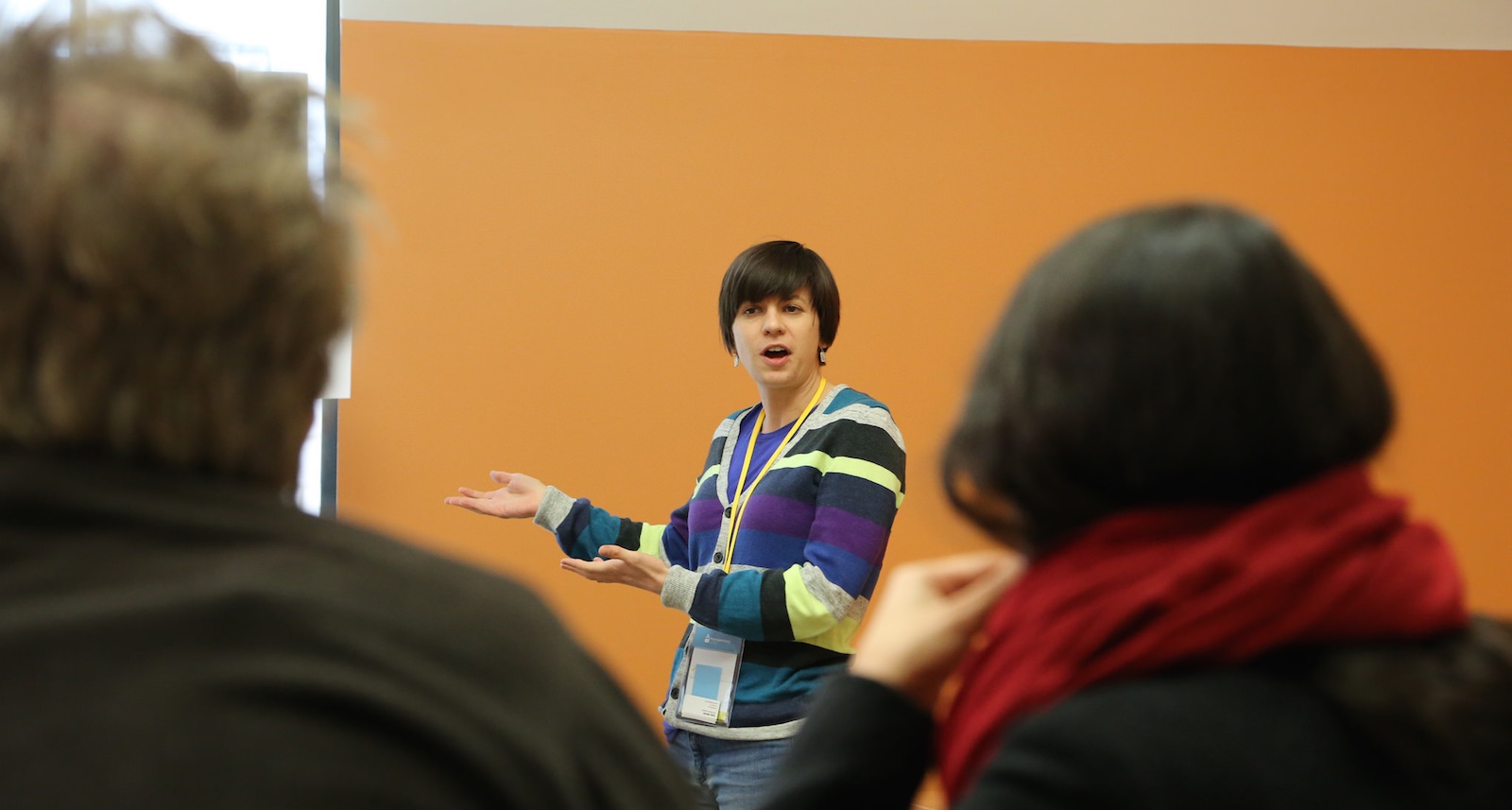 Claire Micklin led a session on how to design a civic app that affects policy change. She told the story of how My Building Doesn’t Recycle went from being a Chi Hack Night project to helping spur the city of Chicago to rewrite its high-density building recycling law.

Derek Eder, with Vyki Englert from Hack for LA and Jill Bjers from Code for Charlotte led a session on how each of their volunteer civic hacking organizations work, and how they sustain them.

A key takeaway from the session was how different each group was despite sharing common purposes. Especially when the focus is on civic hacking in local context, developing a sustainable model requires work on a case-by-case basis. There is no clear, single top-down model that will work well and also be sustainable.

Chi Hack Night, Hack for LA & Code for Charlotte each adapted to the context in which they operate in. Factors like buy-in from local stakeholders (govt or otherwise), size of their city, and how existing communities are tapped into, all dramatically shape how they operate.

Being open-minded and flexible will go a long way, as these contexts may even shift. A more mature organization like Chi Hack Night has benefited from the unique place Chicago was in circa-2012, but has also had to learn how to continue to evolve while also resisting co-optation from other organizations.

Read the full notes from this session.

This year was an especially important TCamp, as both the Sunlight Foundation, the hosting organization, and the civic tech movement in general have an uncertain future.

It’s at times like these that the people who truly care about the work we’ve been doing get together, share openly what has and hasn’t been working and figure out new ways forward.

Chi Hack Night was proud and happy to contribute to this conversation, and share our stories of civic tech in Chicago. Long live Transparency Camp!

For more from Transparency Camp, check out Sunlight Foundation’s #TCamp16 Storify and Flickr photosets from Day 1 and Day 2.