Published on Apr 22, 2017 by Stephen Rynkiewicz 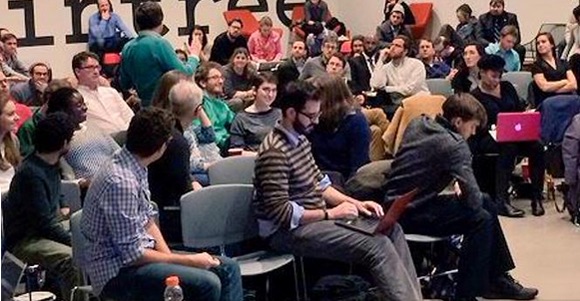 I've been the balding guy near the front of the room for three of Chi Hack Night's five years.

Working in newspapers was an education in civics, and in hacking. Chi Hack Night helped me put the two together.

As Chi Hack Night marks its 5th anniversary this week, its role in Chicago’s tech community and civic life , and I’m personally grateful for its endurance.

At a 2014 Blue1647 hackathon, Daniel X. O’Neil introduced me to a weekly event called Open Gov Hack Night. The co-founder of the EveryBlock community was showing off a flashy set of online zoning maps in vivid heliotrope hues. Sure, not all of us are turned on by zoning maps. But what really excited him was that they were volunteer collaborations. So I was sold on visiting the room where it happens: a classroom in 1871, the Merchandise Mart’s wing for tech founders.

Open Gov Hack Night was a typical after-hours meetup, except that the hackers hung around after pizza to work on civic-minded joint projects. When I started dropping in before my night shift, the regulars were either developers like co-founder Derek Eder with newspaper clients or writers like Steven Vance who coded on the side. These alpha hackers showed their work on sites to allocate vacant city lots or track neighborhood construction sites.

But Hack Night was not just for hackers. Lawyer Maryam Judar explained rulings of the state’s Public Access Counselor, which she had indexed in a Google doc. A deck on the Chicago Public Schools’ responsive web redesign from designer Jay Van Patten could have been presented at any parent-teacher meeting, though it was a heroic in-house feat in buttoned-down Sharepoint web software. No matter their technical expertise, presenters always had time to compare notes—no matter that I was between projects. 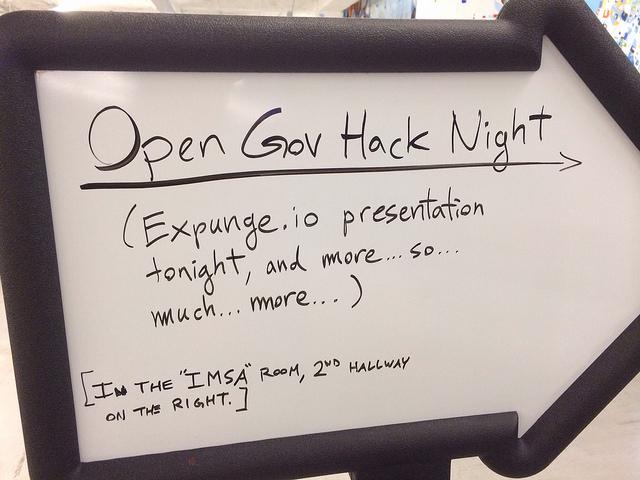 That fall I documented the Chicago School of Data conference, which brought together the nonprofit and tech communities. After a session that touted social-service uses for open-source software, I realized I should be using the same apps to manage neighborhood data. Since my evenings had opened up, I decided to do my own civic hacking—and maybe team up on on something bigger. At least there’d be pizza.

Like many hackathons, the Tuesday night breakout sessions can be more yack than hack. Most work groups coalesce around issues like schools or transportation, then start playing with publicly available data. The most effective projects have informal clients, community organizers on the team who could attest that the hackers were trying to solve an actual problem.

As the renamed Chi Hack Night moved downstairs to the Braintreee offices, the larger crowd shared empenadas and their efforts moved beyond maps. Its most robust product, a website that connects people to food stamps, moved Open Gov Hack Night beyond maps. But its team worked full-time to launch it, and would need more user testing and development before social workers could hand it off to clients.

I huddled in a conference room to work on a pension reform calculator, and with a larger, younger group in the cafeteria on a bicycle-path access map. Team members came and went, and all discovered a dirty data science secret: If you’re lucky enough to get your hands on relevant data, good luck finding time to hammer it all into shape.

Despite the challenges, Chi Hack Night keeps launching working apps, which is more than many hackathons can muster. Eder chairs a loose governing council that’s fine with the casual structure and on-again, off-again workforce. Once I dropped in on a meeting and suggested that a scrum master might bring teams more focus. He looked at me with horror.

There’s a lot of competition these days for my attention Tuesday nights, and my wife enjoys having me at home more often. Yet I still drop in on Chi Hack Night. Friends ask where I’ve been, which is reason enough to return.

This was originally posted on Stephen Rynkiewicz’s blog, Escaped Notice on April 22, 2017. 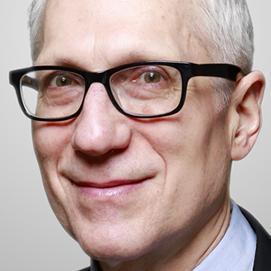