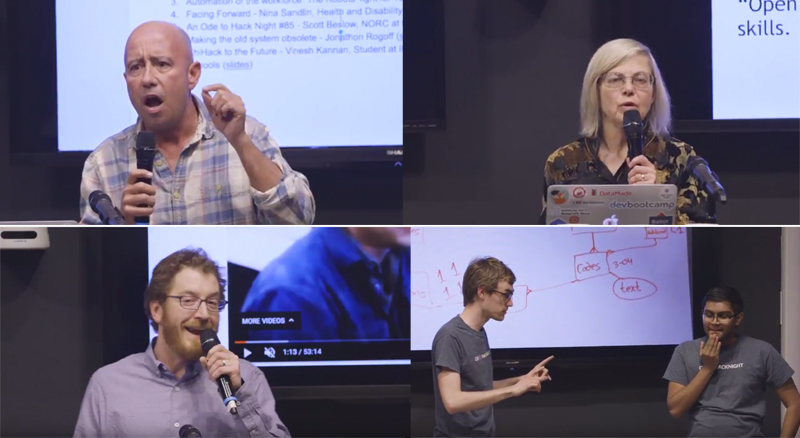 For this special hack night, we asked for presentations along the theme of 5 years forward / 5 years back. We also wanted to open up the format a bit and encourage other kinds of performances, including talks, poems, songs and skits.

Here are the 7 lightning performances. You can also watch them all on our YouTube playlist.

To kick off our celebration of Chi Hack Night’s 5 year anniversary, Cook County Commissioner John Fritchey presented an honorific resolution commemorating the event. You can download a copy of resolution 17-2735 here.

A Resolution of the Board of Commissioners Cook County, Illinois honoring 5 years of Chi Hack Hack Night. Thank you @johnfritchey! pic.twitter.com/RTVolSxvuZ

3. Dave Chary: Automation of the workforce: The Robots’ fight for 15

Dave Chary discusses the effects of business automation on the workforce and what repercussions this may have on the local and global economy.

Nina shares a bit about prosopagnosia and highlights some of the faces she’s met at Chi Hack Night over the years.

A poem about sewage in the river, crap in the lake, and the next five years of open water data in Chicago.

Jon gives a brief discussion on his background, where he was 5 years ago, what he’s doing today professionally and with Legislated, a Chi Hack Night breakout group striving to make it easier for citizens to participate in the State legislative process.

7. Vinesh Kannan and Andy Rasmussen: ChiHack to the Future

Vinesh Kannan (Michael J. Fox), a 25-year-old college student in the year 2022, is accidentally sent 5 years into the past in an empanada-powered “time machine” invented by his close friend, the maverick scientist Andy Rasmussen (Christopher Lloyd).