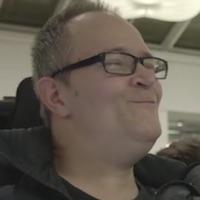 Having an affinity for curly braces and the properly placed semicolon, it was only natural that Steve became a .NET developer.

Born and raised in Chicago, he is often seen rolling around the city in his power wheelchair trying to avoid his natural enemies — badly cracked sidewalks and their cousins, sidewalks without curb cuts. He recalls being at his first Chi Hack Night (#110) learning about how other people were using data to solve other problems that people encountered in the city and thinking, “hey, I think I could do that.”