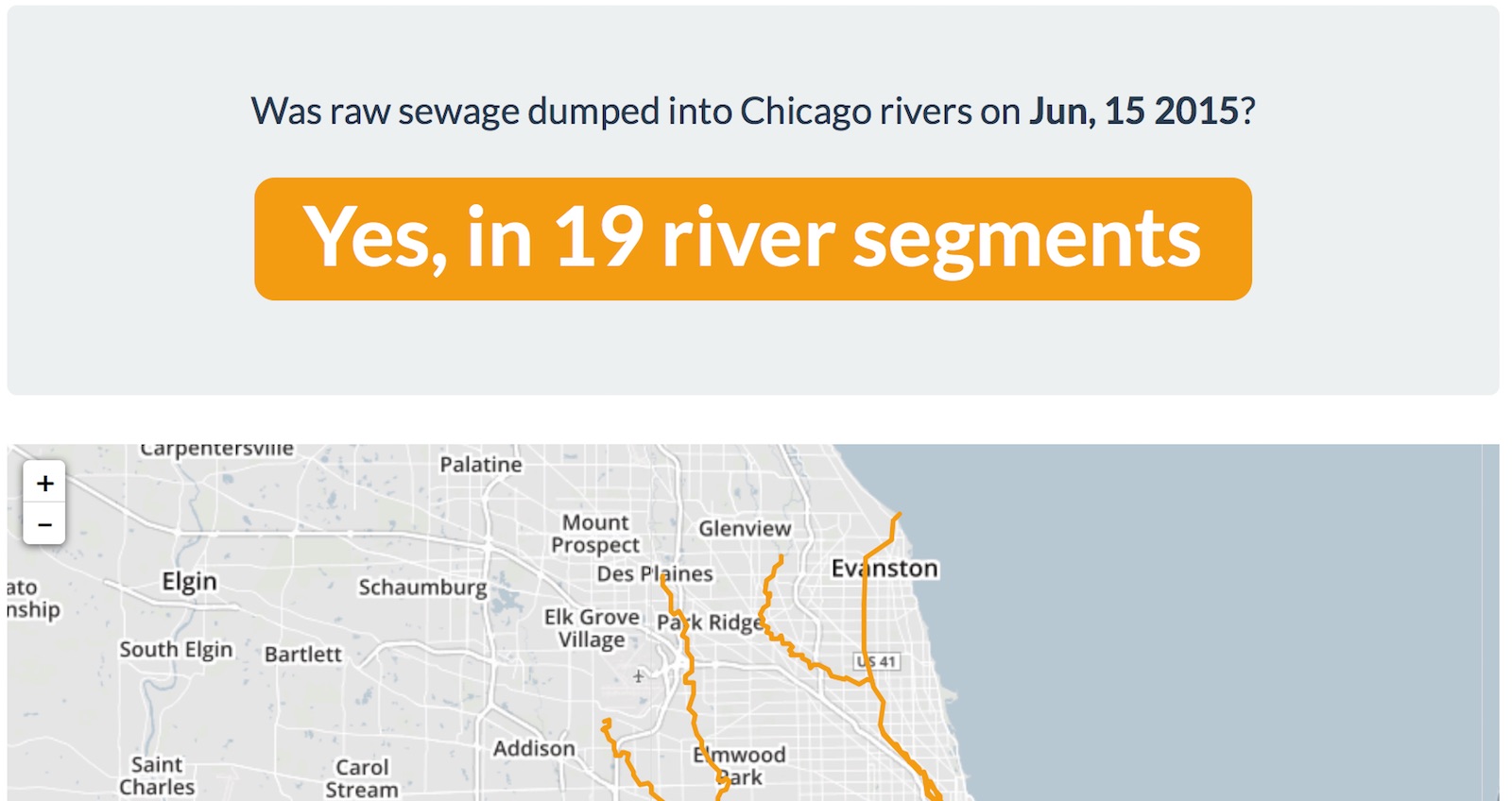 Is There Sewage in the Chicago River

Whenever Chicago gets a lot of rain or there’s a significant snowmelt, the Chicagoland water management agencies must dump excess wastewater into the lake and river in order to prevent flooding. Is There Sewage In The Chicago River? Notifies you whenever these combined sewer overflows happen to raise awareness around our impact on the environment and those downstream of us.

In the presentation, he talked about the many government websites in Chicagoland that have data behind them, but aren’t published on the City’s Data Portal.

One of these sites is MWRD.org, a website for the Metropolitan Water Reclamation District of Greater Chicago. On this site is a page that notifies you whenever a combined sewer overflow occurrs. Pretty much no one goes to or has heard of this website, so there was an opportunity to make this information more accessible to more people.

The original idea for the site Forest suggested was, Is there shit in the river? We opted for the PG version.

Chi Hack Night gave Forest the opportunity to share his idea with a group of interested folks. Immediately after his talk, Derek Eder and Scott Beslow started working on this project, and a few days later, a prototype was built.

Since then, a lot of folks have helped out on the project and experimented with the data, from predicting when a sewer overflow might happen, to matching up rainfall data in the Chicago region.

The biggest impact of this project was in raising awareness around this issue. We got written up in DNAInfo, Chicagoist and Reddit which has drawn over 32,000 unique visitors since we launched in January 2014.

We plan on broadening this impact by adding more calls to action and partnering with local environmental advocacy organizations.

We learned a lot about the Tunnel and Reservoir Project (TARP) megaproject that MWRD has been building since the 1970’s and how the continued urbanization of Chicagoland effects the surrounding environment.

We learned about the consent decree placed on MWRD from a lawsuit won by the EPA to make Chicago riverways clean enough for recreation.

After launching the project, we got a meeting with David St Pierre, Executive Director of MWRD. Though ultimately nothing came out of that meeting, we learned how a website, properly leveraged, can get the attention of those in power to advocate for change.

Anything else to add?

Three years on, this website still gets a lot of visitors, mainly because we keep dumping raw sewage into our rivers. There doesn’t seem to be any signs that it will stop soon.

New Open City Site Lets You Know When Sewage Is Being Dumped Into The Chicago River, Jon Graef, Chicagoist